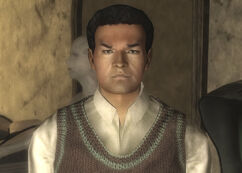 “In case you haven't noticed, I run a fabulous shop, and live in the most fabulous of places. You can't push people like me around! Ha!”

Anthony Ling is a resident of Tenpenny Tower who runs the store New Urban Apparel in 2277.

Anthony is the owner of New Urban Apparel, a shop that sells clothing items to the residents of Tenpenny Tower. As one of the few purveyors of high-quality clothes, his selection is unrivaled within the Capital Wasteland. Anthony has salvaged many pre-War items over time, and their excellent condition is a point of pride for him.[1]

Tenpenny Tower: Anthony Ling is one of the residents who needs to be convinced to allow ghouls to live in the tower.

Anthony Ling appears only in Fallout 3.

Occasionally, he can be found wandering around the areas of Vault 101 and Megaton (blown-up). The player character can speak to him and he will act as if he is still in Tenpenny Tower.[verified]