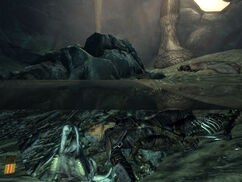 The ant researcher is a scientist who can be found, most likely dead, at Shalebridge in 2277.

The ant researcher has a passion for arthropods and wandered into the Shalebridge ant hill for research purposes. The smaller forager ants didn't mind him, but when the attacking colony begins invading, he can then be found deep in the forager ant burrow, usually lying dead near a small stagnant pool of water in the egg chamber.

* A bobby pin is found on his person approximately 50 percent of the time.

The ant researcher re-spawns every 72 hours with a new book, allowing for an unlimited amount of Science skill points to be added.

The ant researcher appears only in Fallout 3.

Retrieved from "https://fallout.fandom.com/wiki/Ant_researcher?oldid=3124999"
Community content is available under CC-BY-SA unless otherwise noted.