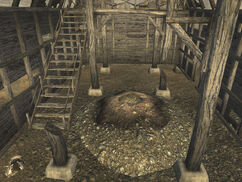 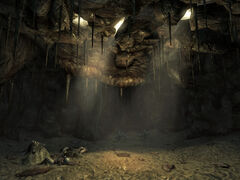 The ant mound is a location in the Mojave Wasteland in 2281. It is located south of the Allied Technologies offices and Camp McCarran, or northwest of REPCONN headquarters. It consists of a single section cave inhabited by fire ants.

An old, dilapidated farm has been taken over by fire ants. They have killed the two brahmin in the corral and likely the inhabitants of the farm itself. The ant mound is hidden in the barn.

In or near the barn there are up to seven fire ants present. Up the stairs inside the barn, there are two metal boxes, a footlocker, two toolboxes, a grenade box, and an ammunition box. Ant nectar can be found in the ant refuse piles around the barn.

Inside the mound is a small network of tunnels with fire ants, a fire ant queen, and a few dead wasteland settlers. Sometimes, ant queen pheromones can be found on the dead queen.

The ant mound appears only in Fallout: New Vegas.

Add a photo to this gallery
Retrieved from "https://fallout.fandom.com/wiki/Ant_mound?oldid=3366916"
Community content is available under CC-BY-SA unless otherwise noted.