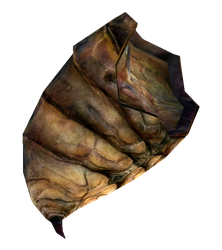 +1 Hit Point per second for 5s
+3 RadiationHardcore mode only:
-25 Starvation
-1 Strength for 120 seconds

Ant meat is a consumable item in Fallout: New Vegas.

Ant meat is a type of meat scavenged from giant ant corpses. It can restore Hit Points and help stave off Starvation, but also imparts +3 radiation when consumed. Additionally, it temporarily lowers Strength by 1-3 points when playing on Hardcore mode. It is one of the few types of meat in the Mojave Wasteland that is not used in crafting other consumables.

Note: Radiation level is not affected by Survival skill level.

Anywhere that giant ants spawn including:

Its appearance and stats are identical to that of bloatfly meat.

Retrieved from "https://fallout.fandom.com/wiki/Ant_meat_(Fallout:_New_Vegas)?oldid=3316845"
Community content is available under CC-BY-SA unless otherwise noted.