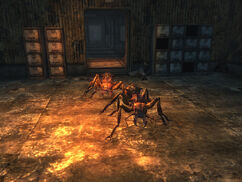 “Long story short the power failed a few days ago because giant ants have tunneled in to the generator room and set up a nest.”— Raquel

Ant Misbehavin' is a side quest in Fallout: New Vegas.

"Ain't Misbehavin'" is a 1929 song written by Thomas "Fats" Waller. It is featured in the musical of the same name. It would later feature on Fallout 76's Appalachia Radio.

Retrieved from "https://fallout.fandom.com/wiki/Ant_Misbehavin%27?oldid=3234944"
Community content is available under CC-BY-SA unless otherwise noted.