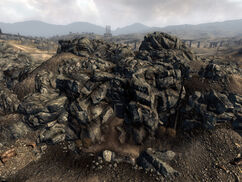 The AntAgonizer's lair is the hideout of the AntAgonizer in the Capital Wasteland, just northwest of Canterbury Commons.

After arriving near the exterior, there are two ways to proceed. The first is through the rather obvious door, which leads to Canterbury tunnels, and not the AntAgonizer's lair; in the last room, there is a switch to open up to a stairway leading to the lair. The caverns are mostly empty but contain a few ants to fight and a decent number of frag mines. Following the caverns through to the end leads to the front of the AntAgonizer's lair.

Alternately, on the top of the hill that the door is embedded in is a grate that leads directly into the back of the AntAgonizer's lair. However, the grate is locked and requires a Lockpick skill of 50 to pick. A key exists, but only on the AntAgonizer's person.

Traveling through the tunnels rather than lockpicking directly into the AntAgonizer's lair reveals a relatively empty set of tunnels filled with mines, a few ants, and the occasional trap.

The following items are located within Canterbury tunnels:

The AntAgonizer's lair appears only in Fallout 3.

Lair sewer grate entrance
Add an image to this gallery
Retrieved from "https://fallout.fandom.com/wiki/AntAgonizer%27s_lair?oldid=3267089"
Community content is available under CC-BY-SA unless otherwise noted.