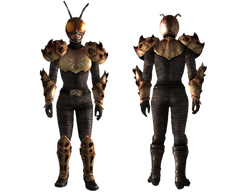 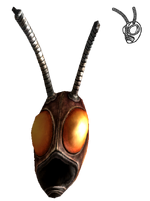 The AntAgonizer's armor is strongly inspired by ants, with shoulder pads, greaves, and armguards resembling a giant ant's carapace, and the helmet having insectoid eyes and matching antennae. It gives a decent DR of 20 and gives a +1 bonus to Agility, although it's fairly heavy at 15lbs and gives a penalty of -1 in Charisma.