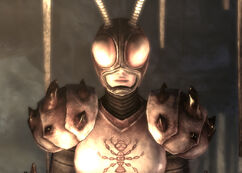 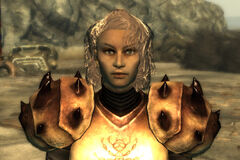 Tanya, without her helmet

The AntAgonizer, real name Tanya Christoff, is a "supervillain" located in the town of Canterbury Commons in 2277. She possesses control over giant ants and is fighting her nemesis, the Mechanist. She is dressed in an ant costume, comically emulating a supervillain.

Tanya Christoff was born in 2250 and is 27 when James leaves Vault 101. As a child, she traveled the wasteland with her caravaner parents and she was a fan of the old Hubris Comics magazines that she found across the wastes, particularly Grognak the Barbarian comics.

At some point during her teens, her parents' caravan was attacked by giant ants and both her parents were killed. Witnessing this traumatized Tanya and led her to lose herself in the world of Grognak's stories, becoming obsessed with the character the AntAgonizer, a villain with a life story similar to hers. Eventually, she took on the mantle of the AntAgonizer herself and, after developing a method to tame giant ants, she sought out to carry out her comic book counterpart's goal of destroying mankind.

As the AntAgonizer, Tanya thinks that Canterbury Commons - a major location in the trading route her parents helped put on the map - is a blight on the wasteland. Locals used to see Christoff lurking in a sewer system to the north of town, covered in mud and dirt. Giant ants eventually started hanging around. She disappeared for a few months and reappeared as the AntAgonizer, harassing the town ever since.[1]

Tanya Christoff/the AntAgonizer appears in Fallout 3, and is mentioned in "Grognak & the Ruby Ruins" in Fallout 4.

"AntAgonizer" is a play on words. As well as having the word "ant" in it, to "antagonize" is cause someone to become hostile.

Sometimes she can glitch and end up standing outside of Megaton, still dressed in her costume but unaccompanied by her ants. This bug can occur if The Superhuman Gambit was completed without visiting her. [verified]

Sitting on her throne

Battle between AntAgonizer and the Mechanist

The AntAgonizer in Fallout Shelter Online

Retrieved from "https://fallout.fandom.com/wiki/AntAgonizer?oldid=3491410"
Community content is available under CC-BY-SA unless otherwise noted.