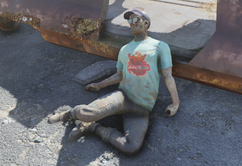 Ansel Abrahms appears only in Fallout 76, introduced in the Wild Appalachia update.

Ansel at the Miners monument

Ansel at the Colonel Kelly monument

Ansel at the Whitespring Resort

Retrieved from "https://fallout.fandom.com/wiki/Ansel_Abrahms?oldid=3229565"
Community content is available under CC-BY-SA unless otherwise noted.