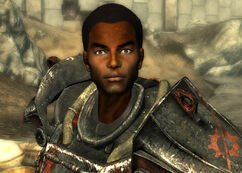 “Way we figure it, if traitors think we're too harsh in following orders, we're probably doing something right.”

Defender Anne Marie Morgan is a member of the Brotherhood of Steel Outcasts in 2277.

Currently on guard duty, Morgan is a tough, no-nonsense soldier with undying loyalty to her friend and Protector, Henry Casdin. She is growing ever more suspicious and exasperated by Elder Lyons's decisions. She enjoys beheading raiders using the latest in archaic laser technology.[1]

The Outcast Collection Agent: Morgan says to speak with Protector Casdin about a job to turn in loot for supplies.

She and the other Outcasts will turn hostile if told to, "shut up and get that fucking gun out of my face." when spoken to for the first time.

Retrieved from "https://fallout.fandom.com/wiki/Anne_Marie_Morgan?oldid=3185979"
Community content is available under CC-BY-SA unless otherwise noted.