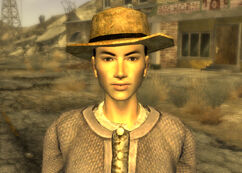 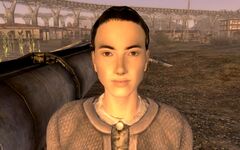 Anne without her hat

“We're heading back home. I hope our troops do the same. This land can't be saved. Trying to grow crops, in this heat, with so little water, is bad enough, but now we've got radiation seeping into the farmlands east of New Vegas. We're done. Let the people of this hell-hole deal with their problems, I say.”

Anne is a farmer at the NCR sharecropper farms, in 2281.

Anne is a farmer that signed on to become part of the Thaler Act, which required her to move from her rural fields to the sharecropper farms. However, she is fed up with the alarmingly diminishing amounts of water available to grow crops with and is planning to leave as a result.

Hard Luck Blues: A few days after the completion of the quest in favor of helping Horowitz and the Vault 34 dwellers, Anne and three other sharecroppers appear at Boulder City, in front of the Big Horn Saloon, and then stay in the ruins. 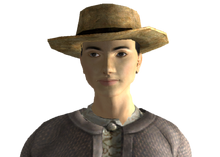 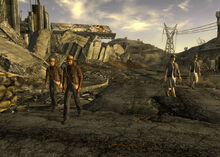 Anne and 3 sharecroppers walking past the Big Horn Saloon
Add an image to this gallery
Retrieved from "https://fallout.fandom.com/wiki/Anne_(Fallout:_New_Vegas)?oldid=3172999"
Community content is available under CC-BY-SA unless otherwise noted.