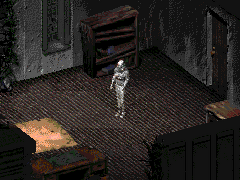 “I stop and knock at every door, but no one comes, no one hears.”

Little is known about Anna, except for that her family lived in the Den (possibly even before the Great War). After the family passed away, including Anna, her spirit became trapped in the earthly realm, since Joey stole her locket from her family house, dooming her to eternal suffering.

Anna appears at night in the ruined house next to the Brotherhood outpost. She is hard to interact with, but the Chosen One can gain information on what exactly trapped her in this dimension and can later free her from her torment.

Anna Winslow appears only in Fallout 2.

Retrieved from "https://fallout.fandom.com/wiki/Anna_Winslow?oldid=3323567"
Community content is available under CC-BY-SA unless otherwise noted.