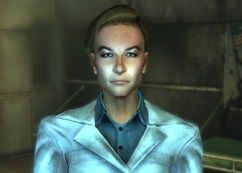 Project Purity
Enclave (after The Waters of Life)

The Waters of Life
The American Dream

“Of course! You've seen the kind of technology these people have. They want to help people. They want to change the Wasteland. I couldn't pass up an opportunity to work in an environment like this.”

Anna Holt is a scientist working together with Doctor Li and Janice Kaplinski on portable fusion power and hydroponics experiments in 2277.

Anna was responsible for the gestation of naturally occurring foodstuffs during her tenure in the Rivet City science lab, where she worked under Doctor Li. Soon kidnapped by the Enclave, Anna Holt was "forced" to help the Enclave in their experiments at Raven Rock. She was astonished by the technology the Enclave possessed and she quickly told them everything about Project Purity. She can be found at Rivet City science lab before The Waters of Life, and at Raven Rock after The Waters of Life, located in a room near the science lab.[1]

Upon first walking into the science lab at Rivet City, one can see Anna having an argument with Dr. Zimmer about his missing android and telling him that Doctor Li has more important things to do. This can serve as a tip to the existence of the Replicated Man quest.

Anna Holt appears only in Fallout 3.

Retrieved from "https://fallout.fandom.com/wiki/Anna_Holt?oldid=3325670"
Community content is available under CC-BY-SA unless otherwise noted.