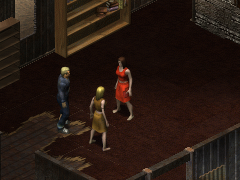 Anna, the lady in red

“Hi sir! I'm the Mayor's assistant, Anna. How about I help you so you can get what you're after and things can go back to normal around here? Besides the Mayor, I saw three people that were able to get a piece of that machine; Angry Rick the bartender, Hank the cheating family man and Juan the shopkeeper. Someone said Casey Barrett has one too, but if you ask me, all she has is a bad case of the clap. Does that help?”

Anna was sleeping with Angry Rick but caught him "smooching" with Casey Barrett and, as a result, broke off their relationship. She wanted to get rid of all the parts of a robot that came to their city, so she told the Warrior where he could find them.

Retrieved from "https://fallout.fandom.com/wiki/Anna_Guarana?oldid=3366417"
Community content is available under CC-BY-SA unless otherwise noted.