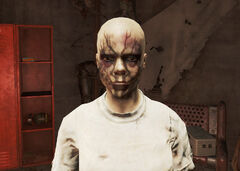 Anise is a dead wasteland survivor in Nuka-World in 2287.

Anise is a wastelander who made it through the Gauntlet as far as the Cola-cars arena. After realizing that her pistol and lack of armor would be useless against Colter's "super charged Power Armor," she elected to take her own life instead of dying at his hands.

Anise appears only in the Fallout 4 add-on Nuka-World.