Far Harbor
“Anglers wait in ambush for prey to come to them. Their glowing "lure" mimics the look of a flower common to the island.”— Loading screen hint

Anglers are creatures that appear in the Fallout 4 add-on Far Harbor.

Anglers are aggressive creatures native to the Island. They are usually found living in swamps or rivers where lure weed is present, sometimes hiding under the surface to ambush prey. The fleshy bioluminescent growth atop its head (similar to an anglerfish's illicium) acts as a camouflage for the predator, effectively disguising it as the surrounding lure weed to fool its prey.

The angler is an aggressive creature with the ability to absorb the fog and spit it out like a fireball, inflicting incendiary damage to any target it is able to hit. In combat, they often rely on these long ranged attacks but have been observed to charge at their prey and use their claws, though often they will halt mid charge to use their preferred method.

With the means to use V.A.T.S., the Sole Survivor can spot these creatures hiding among lure weed ahead of an ambush and avoid the surprise attack. Even without using it, though, the angler's illicium can be distinguished from the plant by the lack of leaves of a single appendage resting on the water's surface. Sometimes, the angler's head can be visible under the surface and mistaken for these leaves from afar but will remain submerged until the prey is close enough. Getting too close will alert the angler, causing it to spring from the water and engage.

Anglers' energy resistance is much higher than their damage resistance, making ballistic or melee weapons the preferable choice for engaging them in combat.

This is the common variant of the angler and is therefore the weakest. Mostly they are found hiding among lure weed, sometimes with other anglers.

An even stronger variant, with a more pronounced, bright lure.

The glowing angler is all around stronger than the common angler and has enough radiation in it that it emits a glow and deals radiation damage to those around it.

The second strongest angler, a genetic deficiency has caused this angler to be white in color. This angler is found by higher level player characters.

Venomous anglers are the most powerful variant of their species. They level with the player character and are therefore immune to the Wasteland Whisperer perk.

An Angler as seen in the loading screen hints 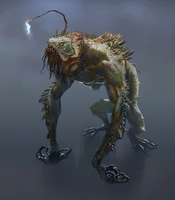