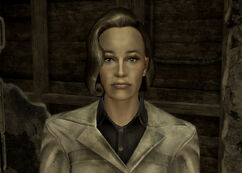 Doctor[1] Angela Williams is an NCR OSI researcher who is a colleague of Thomas Hildern in 2281.

Raised on a cattle ranch out West, Angela Williams is a polite, fair, and above all, competent member of the OSI team stationed in the Mojave. Speaking with a characteristic ranch twang (driving her boss, Doctor Thomas Hildern, absolutely crazy), she received a comprehensive education from the Office of Science and Industry early in her life.[2] Her current assignment is to OSI East, as head researcher on the Hoover Dam Project. Responsible for optimizing the power output of the Dam, Williams knows every inch of the power grid between it and Shady Sands.[3] Occasionally, she helps out with other projects on an as-needed basis. In her own words, one's got to be flexible.[4]

She's not particularly fond of her superior, who seems more concerned with advancement of himself and his agenda, rather than science. It's more than his personality too: She's well aware of Hildern's tendency to take credit for the work of an entire team or throwing contractors under the proverbial bus in service of his ambition.[5][6][7] His latest ambition, the agricultural project, has already cost the lives of several, fueling Williams' dislike of the man. No loss has been felt by her more than that of Keely, a veteran ghoul scientist and the latest contractor to be sent to Vault 22.[8]