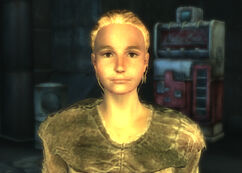 “Yeah, right. I don't think I could get him drunk enough to do that. I wish I had some ant pheromones. Trinnie says they would make any man lose control.”

Angela Staley is the daughter of Gary Staley in the year 2277.

Angela Staley was born in 2261. She works at her father's restaurant for most of the day, primarily as a waitress. She goes to church on Sundays and visits her best friend Diego there at night, after the restaurant closes. Angela is very attracted to Diego and has tried to seduce him a few times. However, his religious conviction and her age have stopped him from acting on her advances.[1]

She is the daughter of Gary Staley, and in love with Diego.

Angela works at her father's restaurant, Gary's Galley until 6 in the evening.

* Only if Gary is also dead.

Angela Staley appears only in Fallout 3.

Removing her via commands or enslaving may lead to crashes and/or corrupted saves, because other Rivet City residents (E.g. Gary Staley) are scripted to interact with her. The solution is to resurrect and re-enable Angela or disabling NPCs, like Gary Staley.

Retrieved from "https://fallout.fandom.com/wiki/Angela_Staley?oldid=3414204"
Community content is available under CC-BY-SA unless otherwise noted.