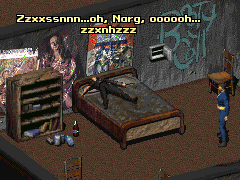 “Not only that, but when I take jet, I get all WILD, and I can barely control myself. I need someone who knows how to take charge to make sure I don't do anything... foolish.”

Angela Bishop is the daughter of John Bishop, head of the Bishops, in 2241.

Visitors to the Shark Club may note an attractive young woman in tight leather eyeing the more attractive men in the crowd.[1] That woman is Angela Bishop, the child of John Bishop and Leslie Anne Bishop. The daughter of one of the most powerful men in New Reno is definitely not a pampered princess, but possessed by a sexual libido that spiraled completely out of control after she learned what it means to be a Reno woman at a young age. She sates her sexual demons with every man she deems attractive, giving her mother no end of grief, as her hormonal system functions in overdrive brought upon by alcohol and chem abuse. Angela uses this fact to her advantage, reveling in the attention and sexual favors men do for her, becoming something of a legend among New Reno whores.

She is used to having things her way and does not take kindly to being turned down. However, in reality, beneath that hardened, lustful exterior lies a sad, broken girl, damaged by Reno and her father's neglect. Drugs, men, and abuse of alcohol also took their toll. According to her mother, her hormones are out of control, making her an insanely fertile woman. Even the mere mention of sperm could result in pregnancy.[2]

If Angela Bishop is hostile, killing her father in any way will cease her hostility.

Angela Bishop appears in Fallout 2, and is mentioned in the Fallout Bible 8 and 9.

Angela will try to take advantage of player characters with a low Intelligence; if one follows her to her bedroom but refuses to have sex, Angela will start to scream rape, at which point it is possible to say "Shhhh! If you don't be quiet, George won't let me play with th'rabbtiz! Shhhh!" A reference to Lennie Small in Of Mice and Men.

If the player character slept with her mother, and while stopped by Mr. Bishop when leaving by saying "Poor choice of last words.", the dialogue will end but he will not be hostile (female characters only). [verified]

Retrieved from "https://fallout.fandom.com/wiki/Angela_Bishop?oldid=3471001"
Community content is available under CC-BY-SA unless otherwise noted.