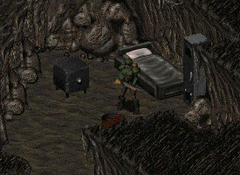 “If we could only sabotage those Vault City laser cannons”

Angel-Eyes is the leader of the mercenaries hired by John Bishop in 2241.

Angel-Eyes is hidden away in the mercenaries' cave near Vault City. He is a rugged-looking man dressed in combat armor with well-maintained weapons and armor.[1] His dog tags as well as those of Blondie and Tuco can be used to help open the raiders' safe, as a piece of the lock combination has been printed on each of them.

Angel-Eyes appears only in Fallout 2.

Alongside Blondie and Tuco, Angel-Eyes is a reference to Lee Van Cleef's character from the spaghetti western The Good, the Bad and the Ugly as the "Bad."

Retrieved from "https://fallout.fandom.com/wiki/Angel-Eyes?oldid=3339672"
Community content is available under CC-BY-SA unless otherwise noted.