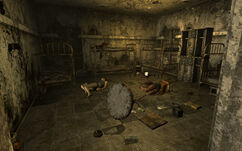 “They haven't been responding to me, last couple of days. I guess they got tired of hearing me talk, but it's still got me a little worried.”— Ranger Andy

Andy and Charlie[1] is an unmarked quest in Fallout: New Vegas.

Former NCR Ranger Andy will ask the Courier to check on Ranger Station Charlie. Upon arrival, it becomes apparent that all the rangers have been wiped out by Caesar's Legion, who left behind two holotapes. The first is located under the desk and the second one is on top of a metal box next to the same desk.

The first holotape is an abortive log recording by an unsuspecting ranger just before the attack. The second holotape is a recording of a legionary boasting that by wiping out the base, they are sending a message to the NCR. The legionary also states that they took a female ranger captive.

After this unmarked quest is complete, Andy will offer to teach a special unarmed move, Ranger Takedown. He will also offer to train this move without completion of the quest upon the passing a Speech check of 30.

Retrieved from "https://fallout.fandom.com/wiki/Andy_and_Charlie?oldid=3470798"
Community content is available under CC-BY-SA unless otherwise noted.
... more about "Andy and Charlie"
RDF feed
Has platform
PC +, Playstation 3 +  and Xbox 360 +