One for My Baby
Old School Ghoul
Andy and Charlie 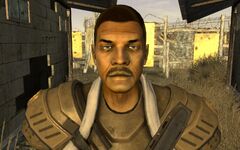 Ranger Andy without his hat

“God damn it! I just spoke to them the other day. If this is some kind of sick joke- (Sighs) Nah, that'd be too far, even for those guys.”

Ranger Andy is a former NCR Ranger living in Novac in 2281.

A veteran of the NCR Rangers, Andy is the closest Novac has to a proper lawman, watching the town while Vargas and Boone watch the highway.[1] He's currently out of the loop, allowing frauds like Ada Straus to prowl the streets of Novac, as he fell down the motel stairs, injuring his leg. Although it was not the worst injury in the world, Andy was knocked flat on his back and forced to stay in his bungalow for several weeks, counting cracks in the ceiling, courtesy of the town's mayor, Jeannie May. This recent injury has been a serious blow to Andy's self-worth and is currently feeling useless and more of a burden than anything else.[2][3]

If he was still in his prime, he wouldn't bat an eye and keep limping about. However, Andy has problems with his arm and leg, leftover from his service and the incident that forced him into retirement. A few years back, he led a team of Rangers to act upon intel that there were Legion slavers holed up in a burned-out house a few kilometers from their station. The place was deserted, save for a scrawny child hiding in the closet. Andy tried to pick him up, to take him to the station and into proper care, but the child hid back in the closet, leaving him with a live grenade at his feet. Although he survived the explosion, half his body was mangled and he couldn't continue to serve.[4]

He settled at Novac, becoming the closest the town has to a sheriff. He had an eye for people and was one of the few who didn't dislike Carla Boone based on her behavior. He considered her a sweet girl, even if she had a tendency to be pretty direct about the quality of life in Novac. He believed it was just a coping mechanism with living on the frontier, reminding herself that there was a better life out there. To keep his spirits up, he stays in touch with the Rangers over at Ranger Station Charlie through his ham radio, with patrols checking up on him regularly. They joke it's paying respects, something Andy takes in stride with a smile on his face - one of the few his retirement affords him. But as of when the Courier arrives in Novac, Ranger Station Charlie hasn't responded in a couple of days and has had him worried enough to ask a stranger to check up on them for him.[5]