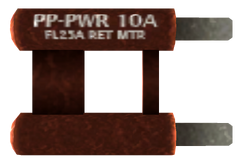 The android component, or neuro-servo[1] is a no-weight, no-value item found in Fallout 3, on dead bodies of androids or other characters from the Commonwealth involved with androids. By appearance, it seems to be little more than a 10A fuse, similar to those used in The Waters of Life quest.

They are only found in The Replicated Man quest in Rivet City, and may not be found by many players as many of the characters in this quest are Essential and cannot be killed until every quest involving them is completed.

Retrieved from "https://fallout.fandom.com/wiki/Android_component?oldid=3407793"
Community content is available under CC-BY-SA unless otherwise noted.