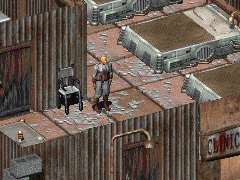 “All right, let me just bolt you into the ol' Doctor here...hope the anesthesia reservoir ain't clogged again...maybe you better bite down on this piece of brahmin hide just in case.”

Andrew is more or less an average citizen left in charge of an Auto-Doc just outside of Vault City. He has received very little, if any, medical training, and will make that known in conversation.

Gain combat implants: later in the game, he can give combat implants via his Auto-Doc, if one gives him the relevant blueprints and materials to do so.

The Chosen One's first mission involving Andrew will be to repair his Auto-Doc. Also, he can remove mutated toes from the radiation (like toxic caves).

Andrew appears only in Fallout 2.

Retrieved from "https://fallout.fandom.com/wiki/Andrew_(Fallout_2)?oldid=3405320"
Community content is available under CC-BY-SA unless otherwise noted.