Default
“You are not like anyone I've ever met.”— Andre Michaud

Andre Michaud is a resident of Far Harbor in 2287.

Andre is found sick in the Bait Shop building in Far Harbor, after spending too much time in the Fog while hunting mirelurks with his husband John. His husband was blindsided by a mirelurk hunter and killed.[1]

Residents of Far Harbor can be found asking for his gun to sell to get off the Island. Once cured of his illness, he plans to pick up as many guns as he can and go out to kill everything in his path.[2]

Andre Michaud appears only in the Fallout 4 add-on Far Harbor. 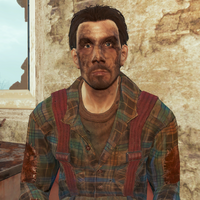