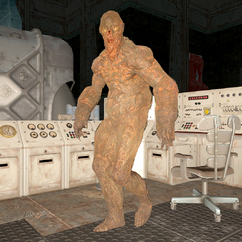 Security Chief Andersen is a charred feral ghoul living in Vault 88 in 2287.

Andersen appears to have been the security chief in position when the bombs fell, having recorded several events in the security terminal. He was invited to a Halloween party but presumably did not make it out before the lockdown was put into place on October 23. He, like all other civilians inside the vault, became ghouls.

When the player character encounters him, he has legendary status and as such, will mutate during combat and will drop a legendary-effect item on death, as well as the control board and any item that feral ghouls typically carry, such as junk or ammunition.

Retrieved from "https://fallout.fandom.com/wiki/Andersen?oldid=3395606"
Community content is available under CC-BY-SA unless otherwise noted.