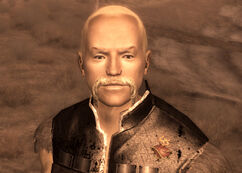 “Thanks for getting me down from that cross. I owe you one.”

Anders is a drug runner working for Diane and Jack of the Great Khans found crucified at Cottonwood Cove in 2281.

Anders is originally from the Great Khan's encampment Red Rock Canyon. While looking for "untapped territory" in the south, Anders was caught by a Legion patrol when he was trying to cross the river and was crucified for drug running when they saw the package he was carrying.

Back at the Red Rock drug lab
Add an image to this gallery
Retrieved from "https://fallout.fandom.com/wiki/Anders?oldid=3122537"
Community content is available under CC-BY-SA unless otherwise noted.