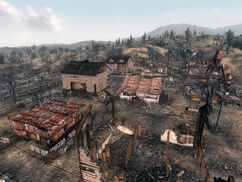 “I can't believe I'm being called a potty mouth by a cannibal...”— the Lone Wanderer to Jack Smith, after finding out the truth about Andale

Andale is a location in the southern area of the Capital Wasteland. It is located north-west of the Nuka-Cola plant, south of Fairfax ruins and south-east of Fort Independence.

Andale is touted by its residents as "the greatest town in Virginia". However, the town holds a very dark secret. Four families survived the nuclear war and remained in Andale, but eventually took to cannibalism after their food supplies ran out. Since then, the murder and consumption of outsiders, along with inbreeding between the Andale families, have become a tradition that's been passed down from generation to generation.

Andale is located directly south of the Fairfax ruins and west of the Nuka-Cola plant. The town is comprised of two two-story, pre-War houses, one ranch style home, and a shack. They are all located on a street amidst the ruins of other homes and a Red Rocket gas stop.

Andale appears only in Fallout 3.

Fallout 3 borrows names from several towns in and around the DC area. Andale refers to Annandale, VA, a city in Fairfax County, Virginia. 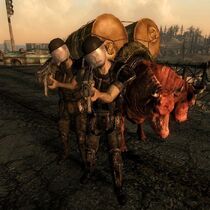 Aqua Pura paranoid encounter
Add an image to this gallery
Retrieved from "https://fallout.fandom.com/wiki/Andale?oldid=2297921"
Community content is available under CC-BY-SA unless otherwise noted.