“I can't believe I'm being called a potty mouth by a cannibal...”— The Lone Wanderer to Jack Smith, after finding out the truth about Andale

Andale is a location in the southern area of the Capital Wasteland in 2277.

Andale is touted by its residents as "the greatest town in Virginia." However, the town holds a very dark secret. Four families survived the nuclear war and remained in Andale, eventually taking to cannibalism after their food supplies ran out.

Since then, the murder and consumption of outsiders, along with inbreeding between the Andale families, have become a tradition passed down from generation to generation.

To the casual observer, Andale is like a town straight out of a fairy tale. It's residents stroll around the streets in pre-War clothes, greet visitors with impeccable politeness, and proclaim the virtues of the United States. In fact, it's supposed to be the greatest town in the Commonwealth of Virginia, proudly voting Republican in every election, including the most recent one that elected a new governor.[1][2]

However, as with all fairy tales, the act is just a cover-up. To understand it, one has to dial back the clock. When the Great War came, four families hid in their fallout shelters beneath Annandale. The survivors managed to escape death and emerge into the newly created wasteland. However, their food stocks eventually depleted and they were faced with the prospect of starvation. The families solved it in their own particular way, by preying on unwary travelers that came into town.[3]

The cannibalism was deemed acceptable as a lesser evil, justified using a peculiar interpretation of Christianity and family love. Strict gender roles were imposed on family members (males work and hunt, females take care of the house and bear children), and no relations outside the four families were permitted. The pretense of the American Dream was upheld as a smokescreen, to disorient newcomers and hide the vicious nature of the residents.[4][5][6][7]

For two centuries, the families lived in Annandale (eventually abbreviated to just Andale), new generations replacing the old. The families intermarried, without bringing outsiders into the family. Eventually, everyone in Andale was related to each other quite closely, resulting in each marriage becoming more and more incestuous. By the 23rd century, the pretense was dropped and men married whoever was closest to their ends. Nobody questioned their way of life, except for old man Harris, who realized just how many people perished in the stomachs of Andale's residents.[8]

The town earned itself a sinister reputation, as while nobody realized it was inhabited by cannibals, everyone knew there was something... off about its inhabitants. Everyone, from caravaneers to raiders, gave the town a wide berth.[9][10][11]

Andale is located directly south of the Fairfax ruins and west of the Nuka-Cola plant. The town is comprised of a couple of two-story pre-War houses, one ranch-style home, and a shack. They are all located on a street amid the ruins of other homes and a Red Rocket gas station.

Andale appears only in Fallout 3.

Andale is based on the real world location of Annandale, Virginia, as Fallout 3 borrows names from several towns in and around the D.C. area. 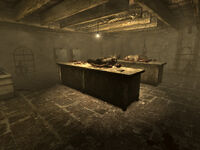 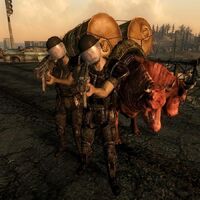 Dean's Electronics in the truck to the east