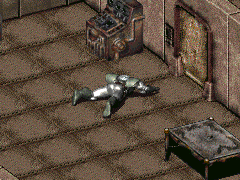 Take the disk from Dennis Allen

from regarding the Brotherhood of Steel.”

The Ancient Brotherhood disk is a holodisk in Fallout.

It can be found on the first level of The Glow, on dead Brotherhood of Steel member Dennis Allen.

Capt. Maxson was right. This place is death. I'm writing this so that if we don't make it back, someone, some day, might find out what happened to us.

We made it to West Tek Research Facility after 20 days of hell. But that was the easy part. The radiation levels began to shoot up as soon as we could see the giant crater. We checked our supplies and figured with our armor and our anti-rad supplies we'd be fine for at least a day of exploring. We felt it was a calculated risk, but the technology we had the potential of recovering was worth it.

We climbed down the crater to the first level and everything seemed to be according to plan. The power was off, so we didn't need to circumvent the security. Or so we thought. There wasn't much of value on this level, so we pushed on.

The second level was more of the same.

When Jensen dropped to the third level, all hell broke loose. The security sensors had been burned out on the first two levels, but not on the third. Jensen was cut to ribbons before he knew what had happened. We'd never seen weapons cut through power armor like that. Men started dropping right and left, and the ones who were still alive lost it. I tried to regroup, but only Soto and Camarillo made it back up here to the first level with me.

The fact that I can smell Soto's burning flesh where his arm was taken off means that my power armor is no longer air tight, so I'm sucking up a lot more rads than I had planned on. I'm leaking hydraulics at an alarming rate. We need to get far enough away from this place before my armor dies.

Camarillo seemed fine physically, but he wandered off about an hour ago, mumbling something about Gehenna. That bastard has all the anti-rad.

That leaves Soto and myself. We can't make it far enough away from here without the anti-rads, so I've got to try to find Camarillo before it's too late.

In the Pip-Boy 2000, this entry is titled "Ancient Brotherhood Tape", and the item description is simply "Brotherhood Disk".

Retrieved from "https://fallout.fandom.com/wiki/Ancient_Brotherhood_disk?oldid=2781143"
Community content is available under CC-BY-SA unless otherwise noted.