Fallout 3
“Excellent! The Capitol Post thanks you. Who knows, maybe someone will turn this photo into a statue one day.

The Anchorage Memorial is a monument located in the southeast quadrant of the Capital Wasteland in 2277. It commemorates the battles at the Anchorage Front Line in Alaska. Inside are several structural levels as well as an underground maintenance area which is inhabited by mirelurks.

Constructed before the Great War, a sprawling underground installation was built under the base of the monument. After the war, a group of wastelanders herded the emerging mirelurk population into the facility, resulting in the mirelurks building a nest inside.

The mirelurks were then used as a source of fresh meat, and large quantities were sold to passing traders, earning the wastelanders large amounts of caps as a result. This trade encroached upon a competitor, who began losing business to the operation and eventually a mercenary team was dispatched but ended up releasing the mirelurks, which promptly killed most, if not all of the people in the complex.

To the north of Anchorage Memorial is a super mutant camp against the border of the downtown D.C. area. There is a tent with a captive behind two large trucks, with several interconnected buildings.

The interior includes the living quarters and main workspace for the wastelanders who ran the meat processing facility. The area consists of two floors with minor loot and custom weapon components strewn about. On the second floor, there is a workbench against the south wall. There is one mirelurk that wanders on this floor. On the first floor, there is a safe with the door component in the west room, which appears to have served as a doctor's office. There is also a Nuka-Cola vending machine next to the stairwell on the north wall. The access codes holotape can be found behind the vending machine and there are two exits that lead to the facility bay on both floors. Pre-War books can be found in the room on the second floor.

The next area serves as a hub that connects the other three areas together. It consists of four levels with supply crates and machinery. The second floor has exits that lead to the facility, office, and service entrance. The first floor has several mirelurk spawning pods and an exit to the service entrance. The third floor has an exit to the facility. Finally, the fourth floor exits to the Capital Wasteland. There are four mirelurks in this area along with a dead mercenary on the top floor with a note.

A couple of offices with an entrance to a large underground space. There is a wall safe in the office next to the entrance of the area. There is a Nuka-Cola vending machine against the west wall, next to some lockers and bathrooms. There is a hole in the floor leading to a lower area that serves as the mirelurk breeding ground. There are a lot of mirelurk spawning pods strewn about. A mirelurk king will spawn here, even at lower levels. There are also two other mirelurks. There is an exit to the Capital Wasteland under the water at the far end.

This entrance is located on the south side of the memorial in the Capital Wasteland. A small sewer area serving as a secondary breeding ground for the mirelurks. It also contains an entirely separate area that has what appears to be a dining facility for the workers, including a large kitchen with many refrigerators and a well-stocked bar. The area contains the utility room and a refrigerator with a secret compartment; both are initially inaccessible (except as noted below for the utility room).

The utility room (with around three mirelurks guarding it) is the last door on the right hand wall of the north branch. The utility room is accessible with the door component found in the safe in the Anchorage Memorial facility and a Repair skill of 35. Without the door component, a Repair skill of 95 is necessary in order to access the room. If you are entering this area from the facility bay area, the sewer system with the utility room is accessed by going up the staircase in the kitchen and heading west.

The lowest level of the area is a smaller space with several dead mirelurks and mirelurk meat strewn about. There is a refrigerator that contains a secret freezer compartment (A), which contains the stash mentioned in the holotape found in the utility room mentioned above. It is only accessible after a successful Perception check of 5.[1] The lock for this compartment cannot be picked; the stash key (found in the utility room mentioned above) is needed to unlock it. A door to the Capital Wasteland can be found in the sewer area at the end of the left passage.

The Anchorage Memorial appears only in Fallout 3. 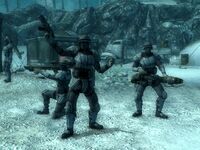 American soldiers posing for the photograph 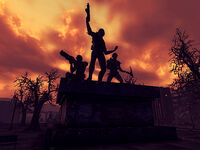 Silhouette view of the memorial

D.C. Journal of Internal Medicine on the table, Dean's Electronics in the safe 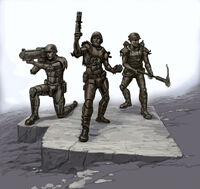