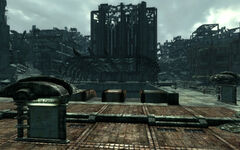 Anacostia Crossing is an area of metro Washington, D.C. just north of Rivet City in 2277.

The Anacostia Crossing entrance is located north of the tower platform linking the Rivet City access bridge to the riverbank. The area above the escalators is a hit-man ambush site for those with extreme leaning Karma. The station below is inhabited by several lightly armed raiders, and the tunnels allow transit to the Mall and Seward Square. Just west of here lies a super mutant camp, overlooking the Jefferson Memorial.

Anacostia Crossing appears only in Fallout 3.

Anacostia is a real area in Washington D.C. The river harboring Rivet City is likewise the Anacostia River.