An Ear to the Ground 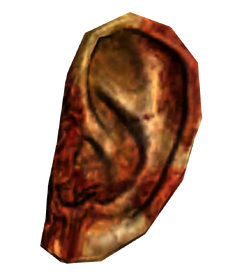 “You get it? Legion ear?”— Private Sexton

An Ear to the Ground[1] or Team Spirit (GECK name) is an unmarked quest in Fallout: New Vegas.

Simply kill any Legion soldiers and bring back the Legion ears to turn in.

The objective is to kill as many Legion soldiers as possible. The best way to do this is to activate the quest, and then do Restoring Hope. You need to turn in at least 30 ears for Private Sexton to give you a reward of 100 caps and 6 beers. After the reward has been given, you can no longer collect Legion ears.

Initial tally of 0, on the Camp Forlorn Hope barracks' wall

Max tally of 30 inscripted
Add a photo to this gallery

Retrieved from "https://fallout.fandom.com/wiki/An_Ear_to_the_Ground?oldid=3413046"
Community content is available under CC-BY-SA unless otherwise noted.