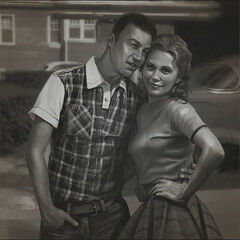 Amy and Jeff on a photograph

Amy L. Kerry was an associate of the Responders who lived in Appalachia before 2102.

Amy L. Kerry was a Vault-Tec University student, turned amateur scientist. She was also the girlfriend of Jeff Nakamura and an acquaintance of the Responders. Despite pressure from the group to join them, Amy opted to remain separate from them but continued working on a project to create a program to monitor the environment for contamination by the Scorched with their assistance.

However, loose lips at the Responders HQ ended up leading to the Brotherhood of Steel catching wind of the project, which led to them trying to procure information and project assets from the Responders at gunpoint. However, even after being talked down by Maria Chavez, the Brotherhood would continue looking for Amy and her research, leading to her going into hiding, as she refused to give the Brotherhood anything following the way they'd treat Jeff and his fellow Responders. Upon the opening of Vault 76 in 2102, her body can be found at the Cow Spots Creamery, the location of her first date with Jeff Nakamura.

Amy Kerry appears only in Fallout 76.

Retrieved from "https://fallout.fandom.com/wiki/Amy_Kerry?oldid=3389249"
Community content is available under CC-BY-SA unless otherwise noted.