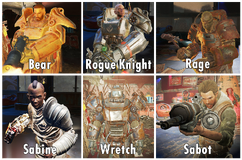 Oneself, upon returning to Nuka-World

“Guess you heard the alarm, huh? Well, you know the deal. You want to take down another worthless wastelander?”— Fritsch

Amoral Combat is a side quest in the Fallout 4 add-on Nuka-World.

After completing The Grand Tour, the next time Nuka-Town is visited, a gang member will inform the overboss that a new challenger has reached the end of the Gauntlet, and they should go talk to Fritsch to find out what to do.

Locate Fritsch in the Nuka-Cade. He will say a new target has entered the Gauntlet and gives two options: allow them through to the arena or drive them out. Driving the target out prevents acquiring whatever gear the challenger and automatically fails the quest. Accepting a fight means the player character has to face the challenger and beat them.

If one chooses to fight, head to the Cola-cars arena, meet the foe and best them to maintain the title of overboss.

This quest is repeatable, with a new challenger every time, culminating in the rogue knight who, upon defeat, will drop the unique weapon Aeternus.

After two or more in-game days, entering the Gauntlet from the arena end will activate the next opponent/phase of the quest.

Retrieved from "https://fallout.fandom.com/wiki/Amoral_Combat?oldid=3417924"
Community content is available under CC-BY-SA unless otherwise noted.
... more about "Amoral Combat"
RDF feed
Has platform
PC +, Playstation 4 +  and Xbox One +