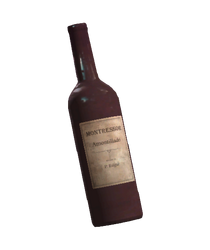 Amontillado bottle is a junk item in Fallout 4.

An empty bottle of Montressor Amontillado wine. It is an empty dark brown bottle in medium-well condition.

In Survival mode, it can be used to bottle water from a water pump or water fountain.

It can be broken down into its individual components for use in crafting:

The bottle of wine, together with General McGann's story and the skeleton shackled inside a wall across the room, is a reference to the short story "The Cask of Amontillado" by Edgar Allan Poe. In the short story, a man named Montressor hates a man named Fortunato for insulting him. As revenge for the slight, Montressor lures Fortunato down into a cellar by promising him a drink of Amontillado wine, and buries him alive inside a wall in this same fashion. This short story was actually based on an urban legend about Fort Independence, wherein an officer is buried alive by the soldiers for killing a favored officer in a duel. In-game the wine bottle has the name "P. Edgar" written on it.

Two empty bottles in the crate and 2 on the corpse.
Add an image to this gallery
Retrieved from "https://fallout.fandom.com/wiki/Amontillado_bottle?oldid=3124663"
Community content is available under CC-BY-SA unless otherwise noted.