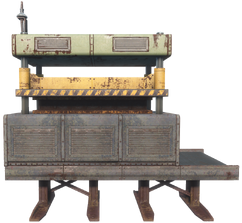 The ammunition plant is a constructible piece of machinery used for manufacturing added in the Fallout 4 add-on Contraptions Workshop. The plant requires 8 power and does not have to be connected via a wire, any power going through the line will automatically connect it to the system. In order to build the ammunition plant, the Sole Survivor must have at least one rank in the Gun Nut and Science! perks.

Retrieved from "https://fallout.fandom.com/wiki/Ammunition_plant?oldid=3150872"
Community content is available under CC-BY-SA unless otherwise noted.