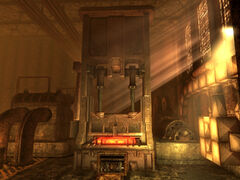 The ammo press in The Mill

The ammo press is a machine that can be used to create ammunition upon completion of the quest Free Labor in the Fallout 3 add-on The Pitt. Access is given by either Wernher or Lord Ashur.

Located overlooking The Hole, the ammo press consists of a terminal used to operate the machine and a materials box at the bottom of the stairs where ammunition or scrap metal is placed. The amount of ammunition received depends on how much ammunition/scrap metal is inserted into the machine.

The ammo press takes unwanted ammunition from the early game (10mm or .32 caliber, for example) and converts it to more desirable ammunition. It also makes ammunition not commonly used (for example, 5mm rounds not used by a Small Guns character) somewhat more useful than simply selling it. Unfortunately, the press is unable to create any energy weapon ammunition, only conventional ammunition.

In order to make ammunition, unused ammunition or scrap metal must be loaded into the materials bin. The bin is a rectangular box with a large X located at the front base of the press that is closest to the Ammunition Mill terminal. Once loaded, return to the computer to select the desired ammunition. After selecting one's ammunition of choice, return to the bin and retrieve the new ammunition.

Example: 2 types of items placed in bin would use:

To calculate how much ammunition of a given type the Press will produce, use the table to the right. For every kind of ammunition or scrap metal in the hopper, multiply its quantity by its value in the table, and add the resulting values up to get the total value of metal in the hopper. Then divide by the value of the type of ammunition you are pressing, rounding down; this is the number of cartridges the press will make.

If you wanted to make .44 rounds instead, you could turn the same 10 scrap metal into thirteen .44 rounds, meaning 15 5mm rounds would be transformed into one .44 round and vice versa, however 14 5mm rounds will provide 0 .44 rounds resulting in a complete loss of 14 cartridges.

When creating any type of ammo, you will return to another page in the terminal and the action of pressing the last round will still be there granting you the possibility to make infinite amount of rounds. [verified]

Retrieved from "https://fallout.fandom.com/wiki/Ammo_press?oldid=3015280"
Community content is available under CC-BY-SA unless otherwise noted.