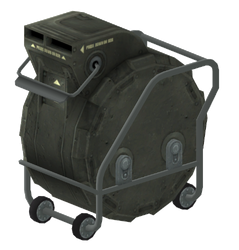 The Guns of Anchorage
Paving the Way
Operation: Anchorage!

These machines will restore certain ammunition types to a preset limit.

The ammunition types provided are:

The dispenser does not refill microfusion cells (for the scoped Gauss rifle), missiles, frag grenades or frag mines. These ammunition types can often be found separately in the vicinity of dispensers though.