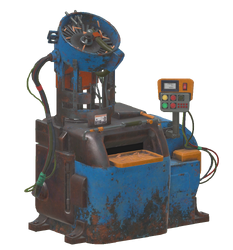 The AmmoPoints ammo converter is a settlement object in the Fallout 76 update The Legendary Run. It is obtained at Rank 5. It can also be obtained by Mortimer with a friendly Raiders reputation for 1250 Bullion

The ammo converter is an orange and blue machine that has a terminal attached to the main converter, which offers AmmoPoints by converting used ammo or spending AmmoPoints on new ammo.

Upon accessing the terminal, the player character will be prompted to either buy or sell ammunition. The converter also explains the AmmoPoints system. Each machine can hold a maximum of 100,000 points. The player character may interact with the actual machine itself, in which case it will spin some ammunition around, before dispensing new ammunition. One can then choose their specified ammunition type, however, they must sell in specified quantities.

Upon choosing to either buy or sell ammunition, the player character will be prompted to choose from the following categories of ammunition:

Retrieved from "https://fallout.fandom.com/wiki/Ammo_converter?oldid=3337031"
Community content is available under CC-BY-SA unless otherwise noted.