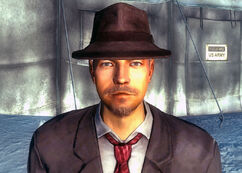 “All right, you boys try not to die out there, okay? God bless you, and God bless the U.S. of A!”

The American war correspondent is a reporter in the Anchorage Reclamation simulation in 2277.

Recently, the premiere daily periodical of Washington, D.C., the Capitol Post, dispatched a journalist to the front lines for a piece on the brave soldiers and their fight against communism. Appearing inside the confines of the field headquarters, the correspondent talks with troops and places them in a pose so heroic, he's certain that one day someone might carve a memorial from the photograph.[1] Someone did, in fact, make a statue of it, named the Anchorage Memorial.

The American war correspondent appears only in Operation: Anchorage .

Retrieved from "https://fallout.fandom.com/wiki/American_war_correspondent?oldid=3414400"
Community content is available under CC-BY-SA unless otherwise noted.