005D004D
“Take control of the battlefield with this American Tank Helmet!”

The American tank helmet is a piece of headwear in the Fallout 76 update Steel Dawn. It is only accessible to members of Fallout 1st.

A tanker helmet stylized after Armor Ace and the Power Patrol. The ear coverings and back of the head are covered with a blue leather, and the Armor Ace emblem is centered on the rear of the helmet. The top portion is of the helmet is red, with several white stars decorating the surface, and a thin blue band running atop the head from ear to ear with "ARMOR ACE" stamped in white letters. The helmet has a pair of goggles resting on the front section of the helmet, and there is an inner liner which goes under the wearer's chin to secure the helmet to the head.

Crafting of the outfit is unlocked upon reaching rank 65 of the third season. Additionally, it is an exclusive cosmetic item part of the paid Fallout 1st subscription service.

Craftable at any armor workbench.

Despite being referred to as a helmet by name, it appears in the crafting menu as headwear instead of a helmet. 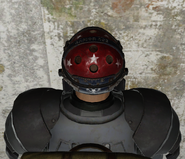 Back of the helmet
Русский
Community content is available under CC-BY-SA unless otherwise noted.
Advertisement