“I ever tell you I got an aunt lives in Anchorage? She's in there... somewhere. And God help me, I'm gonna get those Reds out of her backyard.”

American soldiers are the backbone of the U.S. Army and the player character's main allies in the Operation: Anchorage add-on for Fallout 3.

American riflemen wear winterized combat armor and are armed with assault rifles. They have superior health and armor compared to their Chinese counterparts, but inferior weapons and are vulnerable to Crimson Dragoons and snipers.

The basic U.S. infantryman has about twice as much health as a basic Chinese soldier and is about on par with a Chinese special weapons unit (and also roughly on par with an Enclave soldier) in terms of skill and durability. 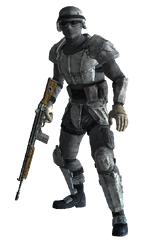 American snipers wear winterized combat armor. They utilize a sniper rifle. They are effective against Chinese infantry. They have lower Charisma than other soldiers. 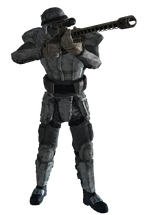 American inferno units wear winterized combat armor and carry a flamer. They are effective against Chinese infantry and entrenched positions. They are always male, but their race is random. 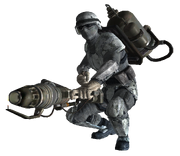 American launchers wear winterized combat armor. They are armed with a missile launcher. They are effective against entrenched positions and Chimeras. 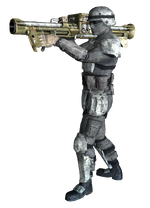 This troop type wears a winterized T-51b power armor and is armed with an assault rifle. They are only seen patrolling in and around the U.S. Army field headquarters. They are always male, but their race is random.

Unlike their powerful counterparts seen during the final battle at the oil refinery, the American T-51b units at the U.S. field HQ are only slightly more durable and skilled than the basic U.S. Infantry soldiers (although they do have superior armor). 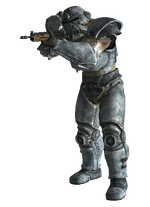 Most of these appear in the final confrontation with General Jingwei. Power armor soldiers are very powerful, with high health and good armor giving them slightly better durability than a non-player character companion or a super mutant master. 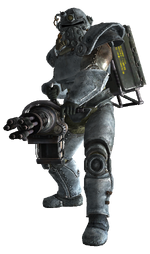 While both the player character and Benjamin Montgomery are technically paratroopers, only one U.S. paratrooper appears in the simulation. After landing near an opening in the ceiling of the Cave Outpost during The Guns of Anchorage he dropped his scoped Gauss rifle, leaving him defenseless against the Chinese soldiers in the cavern below. His death is a scripted event, and he cannot be saved. 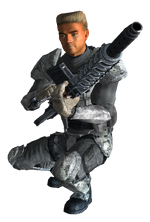 American soldiers only appear in the Fallout 3 add-on Operation: Anchorage.

If the Lone Wanderer takes too much time while trying to kill General Jingwei, power armored soldiers will attack the Lone Wanderer. This happens as the player character is assigned a temporary affiliation with the Chinese Faction so the dialogue with General Jingwei can occur - otherwise he would be forced to attack on sight by his AI. Although the Chinese turn hostile after the dialogue, the affiliation remains and the American faction, appearing only as the power armored soldiers, is hostile due to this affiliation. [verified]

Retrieved from "https://fallout.fandom.com/wiki/American_soldier?oldid=3414395"
Community content is available under CC-BY-SA unless otherwise noted.
... more about "American soldier"
RDF feed
Has platform
PC +  and Xbox 360 +