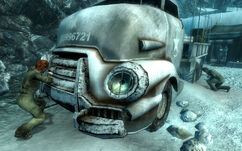 American grease-monkeys are U.S. Army mechanics in the Anchorage Reclamation simulation in 2277.

"Grease monkey" is a general slang term for a mechanic or engineer and subsequently they are responsible for repairing trucks, equipment and power armor suits. They are usually found in the simulation's U.S. Army field headquarters in or around the tent opposite to the command tent.

Grease-monkeys keep the wheels of the U.S. military war machine oiled and rolling. Most of a grease-monkey's time (when not saluting superiors) is spent checking and dialing in schematics information for the winterized T-51b power armor units that have recently arrived at field headquarters.

Killing the Quartermaster while Benjamin is looking will cause all American grease-monkeys to start attacking Benjamin.

American grease-monkeys appear only in a simulation in the Fallout 3 add-on Operation: Anchorage.

Add an image to this gallery
Retrieved from "https://fallout.fandom.com/wiki/American_grease-monkey?oldid=3082146"
Community content is available under CC-BY-SA unless otherwise noted.