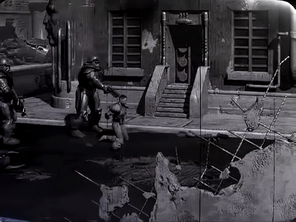 Canada ceases to exist as a sovereign entity
Canadian provinces incorporated into the U.S. as territories
...

“You know what's been stopping the Reds from pouring into downtown Juneau? American soldiers, that's what. And now we've got to worry about someone - Chinese, Alaskan, or otherwise - taking out the pipeline? I don't think so. Effectively immediately, United States troops are beginning a complete takeover of all Canadian assets and resources. Little America is ours. But let's face it - it always has been.”— General Buzz Babcock

The primary reason for the annexation were Canada's natural resources, considered vital to the American military effort in the Sino-American War.[3]

The process of annexing Canada began in 2059, as the Anchorage front line was established in Alaska, to protect its natural resources, especially the crude oil fields, from the People's Republic of China. As parts of the Alaskan pipeline cross Canadian territory, the U.S. government pressured the Canadian authorities into allowing American military units to station near the pipeline and provide security.[4]

The annexation began when the Canadian government caved in and granted permission in 2067,[1] after the Chinese invasion of Alaska in 2066. The United States military did not limit its activities in Canada to just guarding the pipeline. Despite Canadian protests, the country's resources were exploited and stretched to the breaking port to support the American war effort. By 2069, Canada became Little America in the minds of U.S. citizens, with vast stretches of timberland destroyed beyond recovery.[5]

The tipping point came in 2072. As the U.S. escalated its exploitation of Canada's resources, her people took to the streets. Protests and riots erupted in several Canadian cities. When an attempt to sabotage the Alaskan pipeline by Canadian forces was foiled, the U.S. military announced the official annexation of Canada on June 3, 2072.[1][6] In a statement to the press, General Buzz Babcock, commander of U.S. forces in Canada, cited security concerns as the primary reason for the annexation. He also derisively stated that "Little America" was always the property of the United States.[7]

In January 2076, the annexation was completed and Canada ceased to exist as a nation. The provinces occupied by the American military became U.S. territories, remaining under its political and military control, but not a state or commonwealth in their own right.[8] As the Alaskan pipeline swarmed with American military units, security detachments equipped with cutting edge technology brutally clamped down on the Canadian population and the resistance movements, formed out of Canada's armed forces (complete with armored vehicles and modern combat armor).[9][10] Protesters, rioters, and resistance members alike were shot on sight, sometimes even executed on camera.[11] When pictures of the atrocities committed in the name of the United States made it over the border, they sparked unrest and protests from the American public.[2] Even among the military, the annexation was met with mixed reactions. For some, the criminality of the takeover was sickening. However, it had little impact on history, as Canada provided much-needed resources for maintaining the war effort.[12][2]

Annexation complete
Add an image to this gallery

A unique missile launcher named Annabelle was used during this event, obtaining four kills in the region. As a result, a maple leaf marking was prominently displayed on its barrel, along with a Chinese marking.

Annabelle used to belong to an U.S. serviceman deployed in Canada
Add an image to this gallery

Retrieved from "https://fallout.fandom.com/wiki/American_annexation_of_Canada?oldid=3265309"
Community content is available under CC-BY-SA unless otherwise noted.