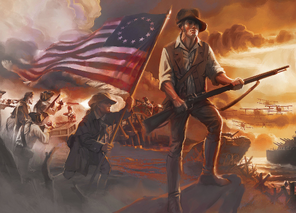 The Revolutionary War or American Revolution was a conflict between Great Britain and thirteen of its former North American colonies, which had declared themselves independent.

British attempts to disarm the Massachusetts militia in Concord led to open conflict on April 17, 1775.

The American Revolutionary War is mentioned in Fallout 3 and Fallout 4.

A monument dedicated to the Battle of Bunker Hill, as seen in Boston

The house of Paul Revere, located in the North End

The Old Granary burying ground, where many Revolutionary War heroes such as Paul Revere, Samuel Adams, and John Hancock were buried

The Old North Church, where Robert Newman climbed to the top and warned patriots of incoming British soldiers