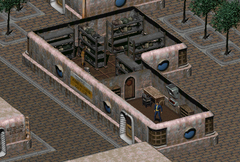 The amenities office is a building located in the Vault City Downtown.

Just east of the Maintenance Center, the amenities office is a small, two room building. Randal, the Chief Amenities Officer, can be found in the first room. A servant (slave) is working in the back room. None of the shelves in the storage room can be looted. The desk in the front room is locked, and attempting to loot either bookcase will make Randal reply to keep hands away. Continued attempts to loot either bookcase will turn Vault City hostile.

Randal will barter with Vault City citizens only, although if the Chosen One has yet to achieve citizenship, they can bluff Randal with false citizenship papers that can be bought from Skeev.

While attempting to repair Gecko's power plant, the Chosen One can obtain a hydroelectric magnetosphere regulator from Randal after speaking to McClure, who says to go to the amenities office to retrieve the part.

The amenities office appears only in Fallout 2.