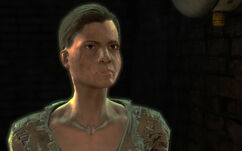 Amelia Stockton is a runaway synth living in the Commonwealth in 2287.

She was captured by Covenant and is the object of the Human Error quest. She is the supposed daughter of Old Man Stockton, a prominent caravan merchant from Bunker Hill and a member of the Railroad. If the Sole Survivor asks him if his daughter might be a synth, he can give varying answers. One possibility is that he does not give a clear answer but states that she is his daughter.

Alternatively, if Old Man Stockton knows the Sole Survivor as a member of the Railroad from having completed Boston After Dark he will confirm her identity as a memory wiped synth and reveal the Institute took his daughter away and replaced her with the current one that is present and he is keeping her as she is the closest thing left to his daughter.

Amelia Stockton appears only in Fallout 4.

Retrieved from "https://fallout.fandom.com/wiki/Amelia_Stockton?oldid=3424179"
Community content is available under CC-BY-SA unless otherwise noted.