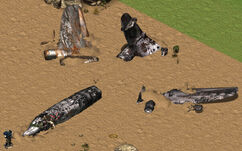 Amelia Earhart is a special encounter in Fallout Tactics. In this encounter, the Warrior discovers a long lost airplane and the remains of a pilot's skeleton hanging out of the cockpit.

This is a reference to Amelia Earhart who attempted to circumnavigate the world in a Lockheed Model 10 Electra aircraft in 1937. Unfortunately, Earhart's plane disappeared mysteriously while she attempted to fly over the Pacific Ocean.

Retrieved from "https://fallout.fandom.com/wiki/Amelia_Earhart?oldid=3206633"
Community content is available under CC-BY-SA unless otherwise noted.