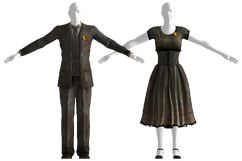 Ambassador Crocker's suit is a piece of clothing in Fallout: New Vegas.

It provides a Damage Threshold of one and cannot be repaired, except by non-player characters. When worn by a female character, the suit is actually a dress. The suit consists of dirty gray pants and jacket covering an equally dirty shirt finished with a gray tie and a golden yellow flower in the left breast pocket.

The suit is only found at the NCR Embassy, worn by Ambassador Crocker, it can be obtained from either killing and looting or reverse pickpocketing.